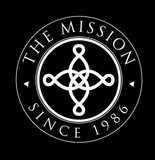 Formed in late 1985 by Wayne Hussey, Craig Adams, Simon Hinkler, and Mick Brown, The Mission became one of the biggest, most talked and written-about UK bands during the 2nd half of the decade, enjoying 14 Top 40 hits, selling millions of albums, and playing sold-out tours worldwide. Followed by perhaps one of the most rabid and fanatical fan bases of all time The Mission still exist today with Wayne, Craig, and Simon playing together again after a few years apart, and with the addition of Mike ‘the boy’ Kelly on drums. Still rated as one of the best live bands in the world, The Mission celebrated their 30th anniversary in 2016 with the release of arguably their finest album, and first in 22 years to hit the top 40, Another Fall From Grace. Finishing 2017 with a handful of shows supporting Alice Cooper in the arenas of Britain, the band then took a sabbatical concentrating on solo projects until they embarked on a 55 date European tour on Feb 29th 2020. They managed to play 10 shows before the tour was curtailed due to the Covid-19 pandemic, the last show being in Lisbon on 12th March. The ‘United European Party Tour’ has been re-scheduled for March-April 2021.