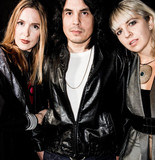 Phenomenal Handclap Band was formed in New York by producer Daniel Collás. Their self-titled debut album was a captivating and highly-regarded concept album that fused disco, psychedelic prog rock, and classic soul. The band took to the road, supporting the likes of Bryan Ferry and Franz Ferdinand, along with notable performances at festivals such as Glastonbury and Wireless, as well as praise from Paul McCartney. A second album was soon recorded, this time in London, followed by critical acclaim and more touring, which while exciting, caused the band to feel like they were stagnating. At this point, they decided it was time for a hiatus, and Collás began to produce other artists like vocalist and multi-instrumentalist Juliet Swango. The two began writing songs which began taking the shape of a full-length album. The only missing piece of the puzzle was vocalist and synthesizer wizard Monika Heidemann, to whom Daniel and Juliet had been introduced by a friend. The trio quickly became close, writing and recording together almost every day. The resulting work, with the addition of two songs written in collaboration with Swedish producer Anders Hansson, is the third Phenomenal Handclap Band album, PHB. The title signifies something of a return to form for Phenomenal Handclap Band. It’s still essentially dance music, but the emphasis is now more on the primal components: a heady mix of raw soul, vocal harmonies, African percussion, fuzzy guitars, and analog synthesizers.