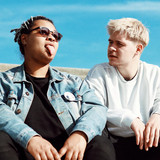 The Austrian electronic pop duo MÖWE has rapidly risen the ranks, stealing music hearts across the globe. Racking up a colossal 300Million+ streams across multiple platforms, boasting millions of Spotify listeners across 61 countries, and enticing fans by showing off their phenomenal DJ and Live performances at 100,000 crowd strong events such as Pride Vienna, and iconic venues and locations such as Ushuaïa Ibiza, Amsterdam Dance Event, Nos Trilhos Sao Paulo, Pacha Germany and many more.

The unique duo has released their first official track together in 2014 on Stil Vor Talent. They then began developing their own distinct good-vibe sound and style while growing a massive global fanbase. MÖWE has had tremendous success on many of their single tracks, one of the most notable being Skyline, which has pulled in 38 Million+ streams and radio play worldwide. In 2018 they also won an Amadeus Austrian Music Award.