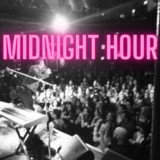 Unsigned artist! For international booking inquiries please contact jareddonaldmitchell@gmail.com midnighthourmusic.com   Hailing from Orange County, California, Midnight Hour formed in 2006 and became whole with a lineup of lead singer Brad Lodge, guitarists Tim Johnson and James Mitchell, bassist Jared Mitchell, and drummer Dan Ardis. Their first single "Running Away" spread like wildfire and the band quickly gained traction. But what's most interesting is that their debut album was successfully financed by a Kickstarter page, surpassing their goal by thousands, with some backers pledging $1,500 each. Oh, the power of the internet and a loyal fanbase! Since, their videos have generated over a million hits, garnered over 500 fan videos on YouTube, and of course, tons of buzz.   Midnight Hour recently graced us at Yahoo! Music with some tunes, playing tracks off their self-titled album. Check out our videos from the exclusive set, including their KROQ-championed official single "Modern Love":   https://www.yahoo.com/entertainment/bp/midnight-hour-infectious-rock-shakes-day-yahoo-224110839.html