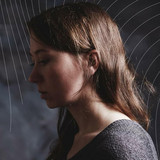 "Her mix of melancholic mood, a voice to kneel down, crystal clear poetry and reduced sounds makes others look pretty pale." (Christian Hentschel/SCHALL Magazin) "She has the incredible courage to write really romantic lyrics, to describe landscapes in her songs, without it sounding corny or offbeat, by the way, she mentions here and there on "Shore" her debut album [...] also people who obviously inspired her musically, Sufjan Stevens at for example or Bonnie Prince Billy. These are wonderful songs." 🌟 (Klaus Fiehe, 1LIVE/ByteFM) "Music, poetry, sound, feeling, distance, touch - Luise Weidehaas can convey all this and more only with acoustic guitar & voice, and this very successful production conjures a touch of melancholy around her. " 🌟 (Lothar Trampert/GITARRE & BASS) "Blown away by the spirit of early Joni Mitchell, Weidehaas sings in German, but not only on the undisputed highlight "Nacht" with English ease: the word always serves the sound. 5 von 5" (Carsten Wohlfeld/WESTZEIT) "Luise Weidehaas once described her sound as earthy, floating and shimmering and thus very aptly described the sound of her debut album, [...] that for me is already one of the best German-language song albums of the year, here a small team has achieved a great success." 🌟 (Holger Beythien/DEUTSCHLANDFUNK KULTUR) Photos: Andrea Sigrist, Bülent Kirschbaum