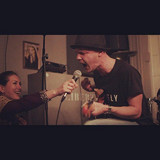 Art Punk Renaissance in 2022? Hello Spotify user. We are UNcomely. Primarily inspired by the wave of psychedelic, grunge/alt-rock and DIY punk rock bands that revolutionised music in the 1960s and 1990s. And white magic. UNCOMELY was formed in Riga, Latvia, where we started out rehearsing for local and international gigs, our most memorable took us to a festival in Moscow, Russia where we played two shows. A few years later we decided to move to the UK to take art-making to a new level. We found a base in the city of Leeds (Yorkshire) and started to play open mics, gigs and work on our first mixtape. The debut release, “Healing Processes” mixtape self-produced in their bassist's bedroom was a thrilling collision of fuzz guitars and manic vocals portraying hard-hitting subjects like addiction, mental health, mindfulness game, slavery and transpersonal psychology. “Games People Play” EP inspired by Eric Berne's transactional analysis book of the same name, we decided to record at the Greenmount Studios. Studio using tape machines and vintage gear from the 60s and 70s and based in the basement of an old church with a dance studio above. Fun times! Willingness to mix genres, create a unique sound and think outside of the box lead to recording “Black Flowers”,

and then rework old and new songs and one remix for our debut album/audio trip called "Fake News" (2020). Enjoy! Want to collaborate on visuals, co-write? send anything or just say hi: uncomelymusic@gmail.com