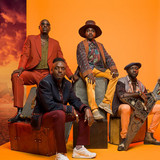 Sauti Sol is a Kenyan afro-pop band formed in Nairobi by vocalists Bien-Aimé Baraza, Willis Chimano and Savara Mudigi and guitarist Polycarp Otieno in 2005. Crowned by MTV EMA as the Best African Acts in 2014, Sauti Sol have gone on to become the Best African Group even getting a BET Awards nomination in 2015 and conquering all continental categories they've been nominated in since. Their third studio album, titled Live and Die in Afrika, released online on the 21 November 2015, was available to Sauti Sol fans globally for free download for 48 hours as an early Christmas present. The album was released under their imprint label Sauti Sol Entertainment as a self-produced work by Sauti Sol. A total of 400,000 downloads were made during the free download period. The trailblazing Best African group released their fourth studio album, #AfrikanSauce, in 2018, with the #1 track Melanin making waves globally . In 2020, Sauti Sol released their fifth studio #MidnightTrain under Universal Music Africa, with the lead single #Suzanna topping charts around the continent.