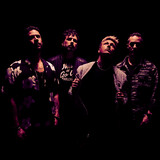 Papa Roach doesn’t do lanes.  Be it rap-rock, electronic rock, rock ’n’ roll or anything in between, the quartet - vocalist Jacoby Shaddix, guitarist Jerry Horton, bassist Tobin Esperance and drummer Tony Palermo - have spent more than 20 years veering across freeways that most bands barely have the nerve to occupy, creating one of the most diverse and fearless discographies in music.   A hard left turn that sees them making their most daring maneuver yet, new single ‘Swerve’ is breathless in its unpredictability. Drawing inspiration from everything from jazz, funk and old-school hip-hop to hard rock and electronica, it’s a white-knuckle ride featuring a blistering array of rock solid beats, thumping bass lines, curveball saxophone licks and crunching guitar grooves, built around a chorus that features a stark warning cry of “Don’t swerve in my lane”, the track displays the fearless ability of its creators to cross as many as they desire.  With Fever 333 frontman Jason Aalon Butler and rap sensation Sueco joining proceedings to create a triple-pronged vocal attack, ‘Swerve’ provides a first glimpse at one of the most varied and compelling periods of the the group’s career. Clear, confident and above all competitive, it sees them challenging perceptions and breaking new ground, tossing the handbrake out of the window in the process.