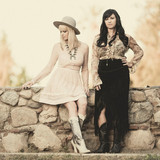 The CALICO in the name of CALICO the Band stands for "California Country" -- a good indication that the pair of Kirsten Proffit and Manda Mosher use the Cosmic American Music of Gram Parsons as their lodestar. The duo accentuates Parsons' hippie country-rock with burnished harmonies reminiscent of Fleetwood Mac and a hint of the jangle pop of '80s college rock, a unique spin on Americana that can be heard on their 2014 debut, Rancho California, and 2017's Under Blue Skies. Proffit and Mosher both hail from California, both falling in love with music when they were kids. Originally, the two were working individually as singer/songwriters, but after sharing a bill at Los Angeles' House of Blues in 2012, the pair decided they should form a band. They added Aubrey Richmond to the lineup and the dance card of CALICO the Band quickly filled up, with the group touring throughout 2013. In 2014 they released the self-funded Rancho California on their own California Country Records. Following its release, they landed spots at major festivals, including Stagecoach and Americana Fest, and had songs synced in television shows. After the release of Rancho California, Richmond left the band, leaving the group once again as the duo of Proffit and Mosher. CALICO the Band worked with producer Jim Scott, who previously helmed albums by Tom Petty and Wilco, for their 2017 album, Under Blue Skies. ~ Stephen Thomas Erlewine, Rovi