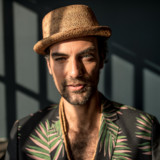 Son of a pastor from Ipanema, João Selva grew up in Rio de Janeiro in a community of former prisoners and converted artists. In his childhood, he played his first guitar notes under the watchful eye of Wanda Sá – one of Bossa Nova’s iconic figures. The influence of his father, a music lover and collector of records, led him to further his knowledge of Brazilian music. At the age of 18, he began a career as a travelling artist before settling down in the city of Lyon, many years later. As a notorious ambassador of Brazilian music in France, he made his debuts with the Forró de Rebeca trio, touring many prestigious venues. Simultaneously, he joined forces with American producer Maga Bo to create the Sociedade Recreativa project, an explosive mix of electronic music and traditional Brazilian rhythms. This will result in international tours, two acclaimed albums (Songlines, Télérama, Les Inrocks...) and a wide broadcast by DJs and radio stations (BBC, Nova, FIP, RFI...). After collaborating with many artists his decisive meeting with the prolific producer Patchworks led him to launch his solo career. They met at a jam session in Lyon in 2016 and began a fruitful collaboration. Their first single "Vida Maravilha" was synched as part of an ad campaign for Citroën. In 2017 the album "Natureza" was released by Favorite Recordings: a dive into the Tropicalist Pop of the 70s that mixes samba, soul and vintage funk. New LP "Navegar" released in 2021 by Underdog Records.