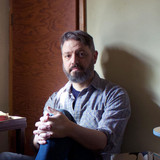 Years before releasing his first album of American roots music, Stephen Simmons grew up in small-town Tennessee, raised by a family of guitar pickers, preachers, and storytellers. He eventually left that town and headed to Nashville, where he launched an acclaimed career whose highlights have included 11 studio albums, more than 1,000 shows, and tours across a dozen countries. It's Simmons' newest release, Family Album, that serves as his clearest tribute to the place (and people) that shaped him. Recorded in the bedrooms and hallways of his grandmother's empty house in Woodbury, TN, Family Album unfolds like an audio version of a family photo album. A journeyman musician, Simmons toured heavily on both sides of the Atlantic Ocean during the same period, releasing a string of records that included label-backed albums, independent projects, live performances, stripped-down recordings, and full-band releases. His music was similarly diverse, running the gamut from acoustic folk music to amplified, Neil Young-worthy roots rock. Show by show, song by song, and album by album, Simmons hand-built his own audience — an audience that has remained fiercely supportive for the better part of two decades. With 2020's Family Album, Stephen Simmons comes full circle. A longtime fixture of Nashville's Americana community, he salutes his small-town beginnings with these songs, whose biographical lyrics nod to the family that played a crucial role in his upbringing.