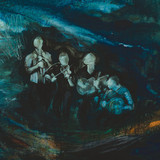 The impact of Scottish quartet Gnoss has been instant and well-deserved. Created in Scotland’s northern isles by Orcadians Aidan Moodie (vocals, acoustic guitar) and Graham Rorie (fiddle, mandolin, electric tenor guitar) in 2015, the duo quickly upped the ante to a four-piece with the addition of Perthshire’s Connor Sinclair on flute and whistles and Clackmannanshire’s Craig Baxter on bodhran and percussion. The sound may be rooted in the tradition but those roots spread widely and confidently into contemporary compositions that manage to be both poignant and powerful, sensitive and savvy. With an average age of just 23, the foursome’s dynamic debut album Drawn from Deep Water was nominated for 2019 Album of the Year in the Scots Trad Music Awards and that year they also gave a sell-out performance in their home city of Glasgow at the world-renowned Celtic Connections, hosting Orkney Folk: The Gathering and then a headline debut at the festival in 2020. 2021 sees Gnoss unveil their second studio album. The Light of the Moon, to be released on May 7, is their first recording of all-original material.