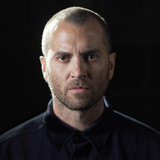 Author & Punisher is the project of Tristan Shone, a mechanical engineer who left from native New Hampshire to San Diego, California in pursuit of his artistic interests and ended up using his scientific skills to build custom musical instruments that give the term "industrial" a new meaning. If the music has ties to the output of bands such as Godflesh, early Swans or even Cabaret Voltaire, it's the nature of his "Drone Machines" which mostly justifies the industrial tag.

The mechanical processes that give life to the music aim to reproduce the rhythms of industrial machinery and its relationship to their human operators, a merging of flesh and steel. After several albums on different labels, among them Phil Anselmo's own Housecore (who also produced 2015's "Melk En Honing"), Author & Punisher has now joined the famed court of Relapse Records, with an album due to be released in late 2018.