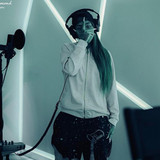 Mestiza is a hip-hop and rap artist from Caracas, Venezuela with a huge international online following of over 1.3 million: her music videos have been viewed over 77 million times on YouTube. Also known as one half of the successful rap duo Neblinna and Mestiza, she’s constantly in demand for performances at concerts and rap festivals in Venezuala and around the globe, sharing stages with many successful artists including Ñengo Flow, Melymel, Darkiel, J Alvarez, Jamby El Favo, and Maldy.