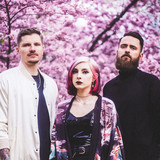 The Berlin post-hardcore trio Future Palace are back with full force. Their new single "Paradise" manifests a profound musical development with a much more massive sound – for the first time shouts and down tuned guitars expand the sonic and emotional repertoire of the band. As well as the debut album “Escape”, “Paradise” was produced by Annisokay guitarist Christoph Wieczorek at his Studio Sawdust Recordings in Halle, Germany. Future Palace are one of the most aspiring post-hardcore acts in Germany. They already worked with Arising Empire for their debut "Escape" and gained several million streams for their songs on the well-known streaming platforms. In early 2022 they will join Annisokay on their European tour and after that hitting the road for their first German headline dates.