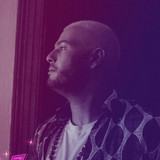 Sameh "SAZ" Zakout is a native of Ramle, a predominantly Palestinian Arab city within Israel, known for its excessive crime and poverty. Transcending the violence plaguing his people and his city, SAZ chose hip hop as a means to overcome, stating, "If I didn't have music, I'd probably be in the streets selling drugs and getting shot at" SAZ was inspired to write hip hop rhymes by his third grade Arabic teacher. He began performing publicly at the age of 16 and has since become prominent figure in the hip hop scene SAZ rhymes in Arabic, Hebrew and English and is widely hailed for his beatbox technique. He has been featured in Rolling Stone and on CNN, and has performed in Europe, the United States, and across Palestine and Israel. SAZ use rap music to deliver a message of unity and love between people.Saz also sees his music as a powerful tool for building bridges between people and fighting ignorance and apathy across the entire world His lyrics are self-reflective, honest and direct.SAZ criticizes his Arab neighbors in Ramle that turn to drugs and violence instead of pursuing an education and a better future. SAZ believes music is his weapon for making a difference and giving pride and hope to all people around the world.