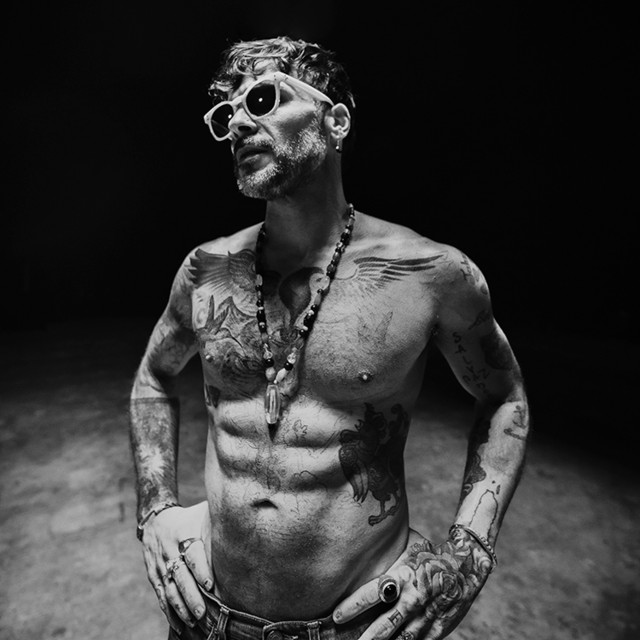 Pedro Capó is an award-winning Puerto Rican singer/songwriter, musician, and actor who has scored numerous hits throughout Latin America. The grandson of Puerto Rican legend Bobby Capó, Pedro initially rose to fame in the rock en español band Marka Registrada during the late '90s prior to embarking on a solo career the following decade. He broke through with "Estoy Enamorado," a 2009 duet with Thalía, and remained a mainstay on Billboard's Latin charts throughout the 2010s; two of his full-lengths, Aquila (2014) and En Letra de Otro (2017), charted in the Top Five of the Top Latin Albums and Latin Pop Albums charts. He scored his biggest international hit with 2018's "Calma," which topped the charts in dozens of countries, both in its original form and through remixes featuring Farruko and Alicia Keys, and won a Latin Grammy for Song of the Year. Born on November 14, 1980, in San Juan, Capó comes from a musical family. His grandfather, Bobby Capó, was an internationally renowned singer/songwriter who ranks among Puerto Rico's greatest musical legends of all time. In addition, his father, also named Bobby Capó, was a popular singer of trova and salsa music. The third generation of Capós to find success in the popular music industry, Pedro initially sang and played guitar in Marka Registrada, who made their full-length album debut with Marka Registrada (1995), followed by 400 + 100 (1998). The latter album spawned Marka Registrada's best-known hit single, "Solo Pensando." While the band carried on for years afterward, Capó parted ways and moved to New York City, where he pursued a career in musical theater, appearing in productions such as The Sweet Spot and Azúcar! Celia: The Life and Music of Celia Cruz. He also embarked on a solo recording career. His debut album, Fuego y Amor (2005), was released on the independent label Racy Music. It was subsequently re-released on Sony Music in 2007 with an alternate cover and track listing. Meanwhile, Capó resumed his acting career, appearing in the films Shut Up and Do It! (2007) and Paraiso Travel (2008). In 2009, he re-emerged as a Latin pop artist, duetting with Thalía on her hit single "Estoy Enamorado." This set the stage for Capó's second album, Pedro Capó (2010). The promotional singles "Vamos a Huir," a Spanish-language interpretation of a Gilberto Gil favorite, and "Un Poquito Más" were issued prior to the album's release, while "Estoy Enamorado" was still garnering airplay. The follow-up singles "Si Tú Me Lo Pides" and "Un Minuto," proved more successful. The former, co-written by Puerto Rican critical darling Kany García, peaked at number 22 on the Latin Pop Airplay chart, whereas the latter reached the Top Ten. The album peaked at 58 on the Top Latin Albums chart. Touring intensely, Capó would not record again for three years. In 2013, his pre-release single "#FiebreDeAmor," reached 43 at Hot Latin Songs, while the ensuing album, Aquila, issued in 2014, reached number three at Top Latin Albums. Capó toured hard and long in support of the record, traveling across Latin America and the United States. In January 2017, he released the video single for the rocking power ballad "Azucar Amargo" -- it racked up over four million views. In August, while Capó was on the road, Sony Music issued his fifth album, En Letra de Otro. In July 2018, he returned with the single "Calma," which hit number one in numerous countries including Argentina, Bolivia, and Mexico. A remix version of the song featuring Farruko followed later that year and landed on the Billboard 200, as well as hitting number three on the Hot Latin Songs Chart. A 2019 remix featuring Alicia Keys furthered the song's popularity. "Calma" was awarded the trophy for Song of the Year at the 2019 Latin Grammy Awards. ~ Jason Birchmeier, Rovi