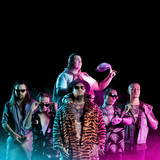 One Morning Left released their third full length album “Metalcore Superstars” on the 22 January 2016 via Inverse Records.   The success around the band was something unexpected, but on the otherhand, how could it not succeed when considering just how fresh and different the band is. They released their first album, “Bree-Teenz” in 2012 on Spinefarm Records and the album shot up to #30 on the album charts. Their follow up album, “Our Sceneration” also charted in Finland at #45.   The band have done their fair bit of work live as well. Known for their energetic shows where absolutely anything can happen, the band has round up doing European tours, Russian tours, playing as support to bands like Amaranthe, Adept, Bam Margera, Protest the Hero, Turmion Kätilöt as well as a German tour as a main support for We Butter the Bread With Butter. One Morning Left also graced the Finnish festival seasons multiple times, playing renowned festivals like Tuska Open Air, Rockfest and Nummirock. The band has also headlined tours in Baltic and Japan!