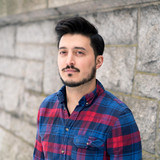 NYC-based Adam Ahuja is a live-looping artist, keyboardist, vocalist, and multi-instrumentalist who melds jazz, rock, funk, soul and electronic music into a fluid style. He has drawn international recognition touring independently as an artist and as a past member of acts such as Robert Randolph & Family Band and the Ana Popovic Band. In 2017, Ahuja released the critically-acclaimed album “Ubiquity,” on which he composed and performed all music, including keyboards, guitar, bass, drums, and voice, and wrote the lyrics. The album was released on Infinity Gritty, a label/consultancy founded by Ahuja in partnership with Grammy-Winning Ropeadope Records . When Adam plays live, he offers what he calls a “neolive” experience: one in which he performs and loop-records various instruments on stage, including keyboards, key-bass, drumpads and vocals, often inviting interactive participation from audience members. Ahuja’s adept performances, charisma, and novel approach to the “one man band” paradigm have made him a widely viewed social media presence with individual videos generating over 50,000 views.