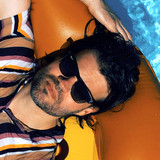 Meet Me in Orbit

Featuring Meet Me in Orbit

Meet Me in Orbit is Northern California natives Jared Brannan and Brandon Bews. After self-releasing two singles in 2014, the duo caught the attention of New York indie label Sky Council Recordings, releasing their debut EP with the label in 2015.   The duo's two EPs were released in 2015 and 2017 to relative praise, with Entertainment Weekly lauding their "[...] ability to work their way inside your head and evoke a real emotional response." Their first EP, Traveller, was featured in the iTunes New Pop Music chart, with the editors there calling it, "deeply satisfying electronic soul music, where the textures are warm and the melodies are inviting with an undercurrent of melancholia that tempers the joy from being obnoxious [...] To hear is to believe."