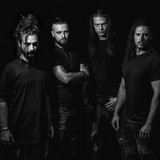 Genus Ordinis Dei formed in Crema (Italy) from a circle of friends in 2011. Over the next two years the band sculpted its style melting new millennium metal with symphonic sonorities. During this period the band started to define their artistic and musical identity, developing the idea for a trilogy where the first album to be released would be Act II of the story, entitled The Middle. The band independently released their self-produced album The Middle in 2013, heavily backed by an intensive run of live shows across Italy and Europe. In 2014 the band met Marco Coti Zelati (Lacuna Coil) and started to work with him to produce their self titled EP. In 2016 the band signed with the danish label Mighty Music to release worldwide both "The Middle" and the EP. In Summer 2016 the band recorded their upcoming album "Great Olden Dynasty" which features Cristina Scabbia (Lacuna Coil) as guest vocals in the song Salem. In Fall of 2016 Genus Ordinis Dei was invited to join the Delirium World Tour as opening act for Lacuna Coil, where they completed a five week endurance of 31 gigs in some of Europe’s most prestigious venues. The tour was a great success for the band, landing them dozens of positive reviews in the press. Over the following months, the band entertained offers from several record labels. In the Summer of 2017 however, they finally signed a worldwide deal with U.S. label Eclipse Records.