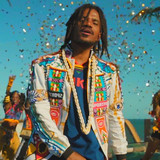 The reggae roots band Natiruts was formed in Brasília (Distrito Federal) in 1994 under the name Nativus. In 1997, the group launched the independent CD Nativus, which had a hit with "Presente de um Beija-Flor" and sold 40,000 copies. Sued by the band Os Nativos, they changed the group's name after a long judicial battle to Natiruts. Reissued by EMI, the first album sold 450,000 copies. Povo Brasileiro had hits with "Povo Brasileiro" and "Proteja-se e Lute," and Verbalize had success with its title track. ~ Alvaro Neder, Rovi