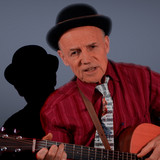 No, he’s not from New York, as Sting fans might think, but from the German capital city. But why has he been there so long - more than forty years?

Robert Metcalf – that´s his real name – is started life in Birmingham, studied law in London, later lived for three years in Paris, before he landed in Berlin, became a social worker, and for many years was a counsellor for drug addicts. At some point along the way he started writing songs in his mother tongue, soon performing them in small venues in West-Berlin. When the Berlin Wall came tumbling down, he caught the eye (and the ear) of German television producers, who were looking for original songs for children. Since then, Robert has frequently appeared on German television, won a prize or two for his children´s songs and performed in some of the country´s best known venues. Several years have passed…and now we find Robert making a sort of musical U-turn: Back to the roots! He still has a guitar in his hand, but now he´s writing and playing English songs for adult listeners. Those songs are sometimes thoughtful and philosophical, sometimes witty and entertaining – and a touch of English humour is never far away. You can watch his music-videos or experience him on stage, where he performs in different line-ups, from solo to quartet. And now it´s time to get to know more songs by the Englishman in Berlin! More infos under www.englishman-in.berlin