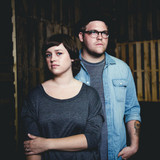 RICTOR is the folk duo of Grammy-winning songwriter Kyle Rictor, a.k.a. Graphite Man and his wife, Kelsey. Since 2008 RICTOR has toured all over North America, captivating audiences with nothing more than finger-style guitar and two voices intertwined so tightly it’s at times difficult to differentiate the two. RICTOR has gained notoriety from their success in film and television being featured on shows like Pretty Little Liars, Suits, Witches of East End, Finding Carter and more, but come from grassroots beginnings, living out of their car, sleeping on floors and playing house shows, earning them a fiercely loyal fan base.   After releasing 2 EP’s in 2015, one of which is a spooky Halloween collection, Ghost Lover , closing with a dark twist on “You Are My Sunshine”, RICTOR released their debut full length album “Nothing” in 2016. An eclectic group of 10 songs with a folktronica bent, all of which were written and recorded by RICTOR shortly after relocating from Nashville, TN to New England.   Kyle and Kelsey live in Connecticut with their daughter, Daisy.