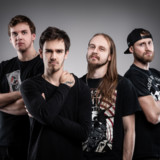 Frozen Poppyhead is a Czech alternative metal band formed in 2017. This formation consists of lead guitarist and singer Richard Tolkner, rhythm guitarist and backing vocalist Alfred Rezek, drummer and backing vocalist David Halada and bassist Jan Tošer. The whole idea comes from Richard’s solo project “Tolky - Screaming of Silence“ which created strong foundations for the current band. All guys have known themselves for a much longer time than Frozen Poppyhead actually exists because they had played together in a metalcore band called Zero Hero. However, the most part of the band wanted to make music in a different way so they decided to form Frozen Poppyhead. Their first single „Blessing of Doom“ was released in July 31. After releasing two next songs, they released their first album „The First Furrow“ in April 1st 2018. Their second full-length album called Everfrost containing 15 tracks was released in February 7th 2021. Frozen Poppyhead plays mainly in the Czech Republic but they have also played several gigs in Germany including a warm-up show for Wacken Festival 2019 where the band got the opportunity to perform as a support band for an american band Dark Sky Choir. FP are dreamers who want to play all over the world on the biggest possible stages. The band is known for their catchy melodies choruses, strong lyrics, guitar solos and heavy sound. As a success, they consider your chilling goosebumps on your skin.