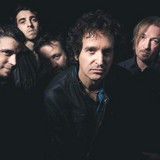 The Creature Comfort are a modern psych-rock band with a darkly surreal vision. Formed in Manchester their music has been described as “glorious, chaotic” (God Is In The TV), “druggy, weird and a gas” (Vibrations Magazine) and to be “held in the same esteem as Joy Division, The Stone Roses, Oasis” (Louder Than War). Sonically, they approach the sounds of Limiñanas, White Denim, Grinderman, MC5, The Hives. Since their debut album in 2013 the band has been playing regular UK tour dates and festivals while gaining radio exposure including BBC Radio 6 Music, BBC Radio London, XFM / Radio X. Their second album ‘Everything Is Hidden’ is out June 2021 via Missing Door / AWAL.