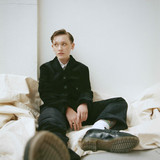 A prodigal young talent, SOAK began her musical journey aged 14 when she first wrote breakout track 'Sea Creatures', cutting her teeth and cultivating a passionate following from her home of Derry. Taking her time to develop her craft and complete school, Bridie signed to Rough Trade and released her beautiful debut album, Before We Got How To Dream', in 2015.

One of the Mercury Prize's youngest ever nominees, the record also won the prestigious Choice Music Prize for Album of the Year, the Northern Irish Music Prize, saw SOAK shortlisted for a Q Award ('Best New Act'), as well as taking home the European Border Breaker Award. With support ranging from the BBC Sound Poll and Jools Holland to playlist support across Radio 1 and 6Music, all these extreme experiences have taken SOAK far beyond (but often right back to) her close-knit Northern Irish scene. Three years later, and SOAK is ready to introduce her new project, beginning with the breath-taking 'Everybody Loves You'. We saw the first glimpse of this back in May at BBC 6 Music’s biggest weekend, which was greatly received by fans new and old. More than just an album, SOAK's second album is journey through Bridie’s own emotional and psychological soundscape; an intense collection of musical thoughts and feelings, which mark her move from Derry to Manchester, from loss of identity to self-acceptance, and becoming the young woman/girl she is now.