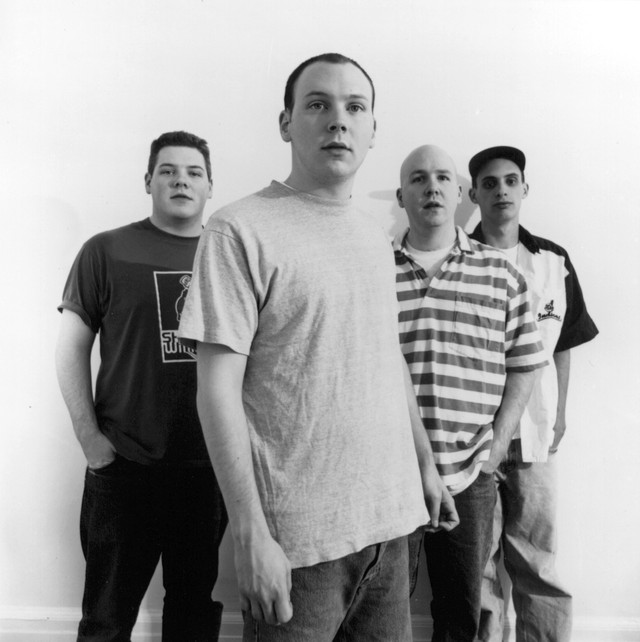 The Smoking Popes' take on punk-pop was centered around lead singer Josh Caterer, whose obsessions with big-band records and black-and-white movies on the American Movie Classics channel led him to develop a vocal style that was unique in the punk world. The Popes sounded like a loud, guitar-based band fronted by a lounge singer, mixing uptempo rock with laid-back vocals and lyrics with an old-time romantic feel. The rest of the band, which formed in the Chicago area around 1991, consisted of Josh's brothers Matt and Eli on bass and guitar, respectively, and drummer Mike Felumlee. While Caterer didn't think of the band's music as punk, the Smoking Popes gained a number of supporters who would have happily argued otherwise, including the respected punk indie label Johann's Face, Green Day's Billie Joe, Alkaline Trio, and the members of another Chicago-based band, Fall Out Boy. Johann's Face released the Popes' debut album, Get Fired, in 1993. Two years later, the band returned with Born to Quit, a major-label effort that featured Morrissey-influenced vocals and a more refined sound. The latter record also spawned the heavily rotated single "Need You Around," and subsequent tours with Jimmy Eat World, Green Day, and Goo Goo Dolls brought the band's music to an ever-expanding audience. Destination Failure followed in 1997. To the heartbreak of many, the Popes called it quits in December 1998. Their final effort, Party's Over, was a covers album that had been recorded earlier that year, but Capitol rejected the record and it didn't appear until 2001, when it was released by Double Zero. The latter label also released two compilation albums -- Smoking Popes 1991-1998, a collection of songs that were previously hard to find, and the 2000 concert album Live -- while the former bandmates pursued different projects. In November 2005, however, the brothers Caterer reunited with new drummer Rob Kellenberger for the Flower 15 Festival in Chicago. This performance was captured on tape and released by Victory in February 2006 as a CD/DVD package, At Metro. A two-month North American headlining tour with Bayside followed, as did the release of a new album entitled Stay Down. The compilation of early-'90s material titled It's Been a Long Day appeared in 2010 followed by the studio effort This Is Only a Test in 2011. ~ Steve Huey, Rovi