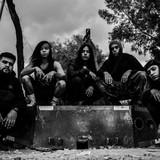 Blast Fury it's a Death/Thrash Metal band from Mexico. Influenced by the stress, knowledge, and demoralization that is inflicted by the system. We homage the hostility and essence from the streets of Ecatepec and turn it into a violent and powerful act. Since 2014 we've been looking for the respect that our musical influences cause on us. Starting at a local project playing Sepultura and Demolition Hammer covers till playing onstage with bands like D.R.I., Demolition Hammer, Hirax or Vio-lence. The band consists of five essential musicians, Angel Mondragón, Diego Maldonado, Luis Hermar, Saúl Hernández and Julio Canales, all current members in our latest album "Mean Tales". We are still struggling. Our only escape from filth it's work harder. 🇲🇽