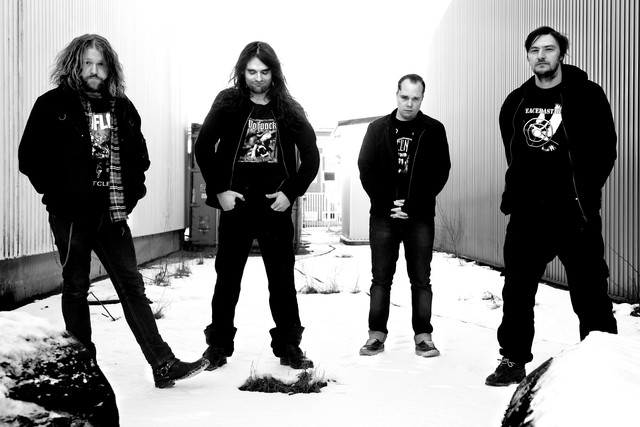 Martyrdöd is a Swedish quartet who specialize in a brand of crust and d-beat punk informed by extreme and black metal influences. They were formed in 2001 in Gothenburg by vocalist/guitarist Mikael Kjellman, bassist Anton Grönholm, drummer Jens Bäckelin, and guitarist/backing vocalist Pontus Redig. Gronholm left soon thereafter and was replaced by a number of different bassists. Their self-titled debut album was issued in 2003, followed by We Walk the Line, a split-EP with Sunday Morning Einsteins. In Extremis was released on Havoc Records in 2005, and was acclaimed all over Europe, guaranteeing the band opening slots on several tours. Sekt, in 2009, was their first release issued on both sides of the Atlantic. After headlining dates across Europe, Martyrdöd signed to Southern Lord. Paranoia, which appeared in 2012, was universally acclaimed and featured an expanded sound with more dynamic guitar leads and harmonic dissonances. For 2014's Elddop, they were joined by bassist Fredrik Reinedahl who is primarily known for his production and engineering work with Sólstafir, Abandon, Burst, and Dimension Zero, among others. ~ Thom Jurek, Rovi