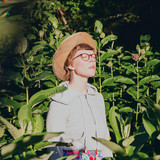 In 2017, Alexandra Sauser-Monnig began recording a set of songs about a breakup that had yet to happen. Her partnership had drifted into a comfortable state of indecision, stalling when it came time to make big life moves or chase new horizons. She had the sense that she needed to slip the relationship in order to pursue everything else life might have in store—more music, more adventures, a general sense of the unknown. Those feelings drifted steadily into a set of songs that lamented the inevitable loss but, more important, outlined the promise of the future. Recording the ten tracks that became her stunning solo debut, Dawnbreaker, under the new name Daughter of Swords gave Sauser-Monnig permission to go. Dawnbreaker, she has found it in some measure—the joy of something new, the excitement of risk. Though Sauser-Monnig nearly recorded these songs as barebones folk ballads, she reimagined them with Sanborn and a top-tier crew of North Carolina friends, like fellow Mountain Man singers Amelia Meath and Molly Sarlé, bandleader Phil Cook, and guitarist Ryan Gustafson. These vivid settings highlight the emotional contours of these songs, revealing the complexity that comes with knowing that, in order to live, you sometimes have to let something as strong as love go.