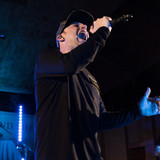 Minneapolis based, 3 Pill Morning delivers a blistering, diverse, dynamic and altogether reinvigorating powerhouse of soaring melodic hard rock from the depths of each band member’s soul. Never Look Back, as the album title suggests, pushes forward, with eyes on the prize, while drawing strength and resilience from all of the highs and lows that have come before. This is the kind of music that quickens the pulse, mobilizes adrenaline and strikes an emotional chord in the same vein as the anthemic, passionate hard rock of platinum trailblazers like The Used, Papa Roach and Breaking Benjamin. These guys are possessed with an indie band vibe while operating expertly in the Rock world. They’ve gone on tour with In This Moment, Hollywood Undead, Alter Bridge, Sevendust, Saving Abel, Buckcherry, Escape The Fate, Nonpoint and many more, all since forming roughly ten years ago in Minnesota. Yet they remain accessible to their fans, hanging by the merch, engaging on social media, playing spontaneously organized acoustic sets and inviting people into the album making process via crowd sourcing. 3PM doesn’t need to be the “biggest” bunch of guys in the room. The reputation they are building is much simpler: they’re the nicest guys anyone could meet, fun to party with, and completely blow down the doors anytime and anywhere they play. Most of all, they write memorable songs and craft albums from the heart, forging a magical connection between band and fan with authenticity.