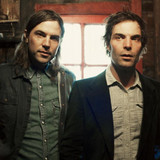 The Barr Brothers are a group out of Montreal fronted by the poly-rhythmic, jocular drumming of Andrew Barr and the songs and guitar playing of brother Brad Barr. Bass, pedal steel, keyboards and horns come in and out of the mix freely. Equally at home in solemn Arcadian ballads, swampy North African improvs, or classic rock and roll revelry, The Barr Brothers continue to embrace and enchant audiences with their methodical-yet-whimsical approach to music making. The new album, Queens of the Breakers (out now) arrives after the longest-ever pause in Brad and Andrew Barr’s 20-year career in music.

Both became fathers since 2014’s ‘Sleeping Operator’ was released.