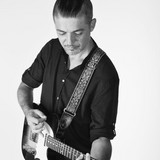 Bulgarian guitarist Dimitar Nalbantov found solace in the recorded works of guitar greats such as Jimi Hendrix, Joe Satriani and Steve Vai. Nalbantov’s love of art and music has been cultivated into a career as an art teacher but more importantly to music fans he has found inspiration in the guise of the beloved string instrument the electric guitar. Taking his passion for artistic endeavors, Nalbantov picked up the electric guitar in ’93 and never looked back. Born in Asenovgrad, Bulgaria in 1976, Dimitar Nalbantov lives and works there today as an art teacher. His free time however, is devoted to his true passion – the guitar. Dimi (as his friends call him) displayed an interest in art and music at a young age, but it was art that was chosen to be the focus of his formal education. That focus began to shift in his high school years when one day in 1993, he picked up an electric guitar for the first time. In the years since, Dimi has recorded studio tracks for several band projects, also serving as audio engineer. He has made presets and recorded numerous demo tracks for AMT Electronics Company, Kuassa, Overloud, IK Multimedia, NI and many more, gaining him many fans and friends around the world.