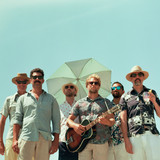 Following up the critically acclaimed 2020 album Hue – featuring breakthrough single "Laughter" – Astrocolor are set to return with their new album Paradise. First single and title track “Paradise” showcases a stunning vocal by the Edmonton-based artist Cayley Thomas, who Paste Magazine hailed as one of the "Best New Canadian Artists You Need to Know" in 2020. Paradise was written to conjure the perfect vacation from beginning to end, with an impeccably smooth soundtrack that drifts effortlessly between hypnotic instrumental music and spaced out vocal flourishes. It's a pillowy playlist to unwind when you need to get off the hamster wheel and onto the hammock – picture St. Germain meeting Khruangbin for a Mai Tai by the pool. Two-time nominees for Electronic Artist of the Year at the Western Canadian Music Awards, Astrocolor’s catalogue has over 5 million streams on the major platforms, a loyal following of listeners globally, and significant national Canadian airplay from flagship CBC shows including Drive, Afterdark, q, and The Strombo Show. So whether you can travel or not, close your eyes and imagine yourself in the most beautiful place in the world. Astrocolor has your one-way ticket to paradise.