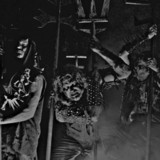 "It is the magic combination of fierceness and beauty that makes the Wolf an exception even in nature. Revered outlaws, feared in their bestial nature, yet also objects of fascination and curiosity, of naturally inhabited and unreachable grace, that men love to hate, and hate to love. But regardless of what judgement the vox populi might pass on these nocturnal predators, they remain just that; a rare breed of hunters; alone, aside, untamed, always hungry" Watain was formed in 1998 in Uppsala, Sweden. The trio of E. Danielsson, P. Forsberg and H. Jonsson has since then constituted the core of the band. While Watain indeed originates from and thereby belongs to the traditional codex of Satanic Black Metal it should also be seen as a culturally unbound expression and manifestation of force, struggle, lawlessness, darkness, freedom and ecstasy. Their live shows are infamous throughout the world for being one of a kind, state of the art ceremonies of wild Black Metal frenzy, where the solemn and sacred collides with raw power. During the last 20 years Watain have also established themselves as one of the most hard working and uncompromising acts within the worldwide Metal scene. Discography (albums only): Rabid Deathís Curse (2000) Casus Luciferi (2003) Sworn To The Dark (2007) Lawless Darness (2010) The Wild Hunt (2013) TRIDENT WOLF ECLIPSE (2018) Line-Up: E. Danielsson ñ Curse and Doom P. Forsberg ñ Darkness H. Jonsson ñ Chains