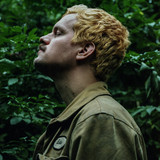 Holland born, London based Christof van der Ven splits his time between working as a chef, playing as a touring musician with Bear's Den and releasing and touring his own music. His debut album 'Empty Handed' (2018) arrived shortly after supporting Bon Iver at the Hammersmith Apollo and ahead of joining Joan As Police Woman, Nick Mulvey, Lisa Hannigan, Talos, Willy Mason, S. Carey and Mikaela Davis as main support on selected UK and EU dates in 2018. His sophomore album, ‘You Were The Place’ was recorded, produced and mixed by Marcus Hamblett (Villagers, James Holden & The Animal Spirits, Bear's Den)

The album features instrumentation contributions from good friends: Tommy Heap (Matthew And The Atlas), Jools Owen (Bear's Den), Tommy Sheen, Emma Gatrill (Matthew And The Atlas, This Is The Kit, Rozi Plain) and Andrew Stuart-Buttle (Lucy Rose, Rolo Tomassi). Christof uses ‘You Were The Place’ as a vehicle to examine his confusion and frustration around an evolving heartache, as well as the pain and humour that comes from shared vulnerability. The album tracks are written from a mixture of perspectives, including friends, family, colleagues as well as his own. ‘You Were The Place’ was released on September 6 2019 on Planet Zog Records