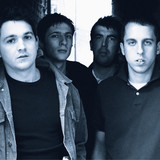 Reputedly named after a Ride EP track, shoegazers Sennen formed in Norwich, England in 2002. This was a fitting moniker for the quartet for a number of reasons, and not only because Sennen's atmospheric and multi-layered post-rock often nodded to their influential Oxford-formed forebears. The long distance from Norwich to the Cornish parish of Sennen -- from Norfolk's east coast to one of the most westerly places in the U.K. -- was also representative of the band's music at its epic, wide-reaching, and exploratory best. Guitarists and vocalists Rich Kelleway and Larry Holmes originally met at school, aged 13, and formed the band after finding common ground in their shared love of the Velvet Underground. While Andrew Horner and James Brown soon joined on bass and drums, respectively, Brown and Holmes would also go on to the flesh out Sennen's sound with their use of keyboards. Following early interest from Beggars Banquet, the band ultimately signed with the Norwich-based Hungry Audio. Their debut release -- a 2005 mini-album entitled Widows -- displayed a gift for merging the expansive song structures of Spiritualized with the sun-kissed harmonies of Teenage Fanclub. Their confident, Pat Collier-produced 2008 debut full-length, Where the Light Gets In, benefited from a larger recording budget, but also showcased the versatility of Kelleway and Holmes' vocals. Prior to the album's release, the band looked to Dom Brownlow -- also the manager of Leeds' iLIKETRAiNS -- to organize their first nationwide tour. While Horner left the band in 2010, he was replaced on bass by Kelleway's younger brother Tim. The release of Age of Denial immediately followed, and that album's pulsing "S.O.S." garnered the band further exposure when it was featured in the hit U.S. TV show True Blood. Interestingly, for 2012's Lost Harmony, Sennen reined in the extensive jams of their earlier work to present an album of short and intimate, more traditionally arranged pieces, all recorded in London during the tense August 2011 riots. ~ James Wilkinson, Rovi