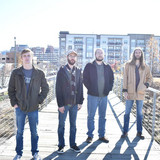 Smoking With the Bandit

Smoking with the Bandit is a group of four long time friends creating engaging, refreshing, and innovative music in the indie rock scene. In early 2016, Colby Wilson, Garrett Payne, and Daryl McCarty were performing as an acoustic trio after a previous band had called it quits. They became a regular favorite around Southside Birmingham, and as their sound and arrangements outgrew an acoustic setting the trio began searching for a drummer to round out their evolving sound. After a long and challenging search, they found percussionist Collin Payne to join the group, providing the depth, rhythmic nuance, and dynamic groove that the trio was seeking. The addition of Collin’s drumming resulted in a captivating sonic experience, combining elements of folk, indie rock, jazz, and progressive music with personal, stirring lyrics and vocal performances that display an inspired perspective on four-piece rock instrumentation.