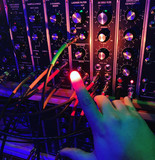 Award-winning composer, arranger and synthesist Scott Ampleford is most well-known for his breakout score to Doctor Puppet, an animated series that spanned 6 years and a wide variety of musical styles. Since then, he has provided music for; Independent films, television branding, educational films and stage productions.   Scott also can be found on YouTube where he makes videos showcasing the creation of his music, demonstrates synthesizers and produces covers of popular music & film music. His cover of the main theme from The Terminator has amassed 10 million views, becoming the most popular on the platform.