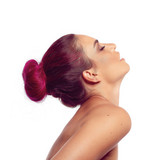 Be it in front of an intimate crowd or on national TV in front of millions of viewers, Aba finds her home on the stage, where her strong voice and stage presence show the audience all the energy she feels inside. Her experiences range from TV shows (finalist in the Italian Xfactor), private gigs, corporate productions, jazz clubs, orchestra concerts, etc. She is used to perform in all kind of stages and has travelled the world with her work. Thanks to her music and various collaborations with international artists, Aba performed on italian most important stages such as Mediolanum Forum, Blue Note in club in Milan, Bravo Cafè in Bologna, Q club in Padova, Politeama theatre in Genova, Auditorium Parco della musica in Roma, and much more, also performing as headliner for the European Juvenile Games in Bratislava (Slovakia) and the #1 world resort The Mulia in Bali (Indonesia). She is now traveling the world with her music with performances in Florida, Indonesia, Qatar, Cyprus, Scotland, Israel, Slovakia, Morocco… In 2017 she travelled alla round the world with her music, landing a residency at the Doha Jazz Club in Qatar, and for the first time in 4 concerts in Florida, USA. In 2018 she got the chance to work again in Bali, Morocco, and twice in Israel with the Haifa Big Band. She had the chance to sing with superstars Mario Biondi, Elio e le Storie Tese, Jermaine Paul, Cece Rogers, Luca Tommassini, Zibba and many more.