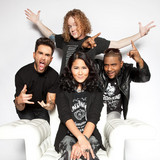 The Party is: Albert Fields - Tiffini Hale - Chasen Hampton - Deedee Magno Hall - Damon Pampolina As the first band signed to #HollywoodRecords, The Party was a pre #BlackEyedPeas group consisting of 3 guys & 2 girls that combined music styles, fashion and the best of all things 90’s, presenting it with 5 of the most diverse, multi-talented, singers and dancers you could find. Produced by music legends @Dr Dre, @Delicious Vinyl, @Teddy Riley, #StephenBray & more, The Party (an acronym for Positive Attitude Reflects Todays Youth), was formed from original cast members from the ‘All New’ Mickey Mouse Club and went on to release 5 CD’s with Hollywood Records. Gracing the covers of all the teen magazines, The Party became regulars on MTV, VH1 and BET, touring the world with some of the biggest stars of the era. Continuously topping the dance charts in major markets, The Party won over so many with their contagious dance energy, ahead of their time songs, true talent & heart. They have been representing a social movement for 30 years now with their diversity defining their legacy. Currently members of The Party are still swinging with new singles, performances and initiatives, still promoting diversity and inclusion for social charities all over the world.