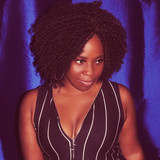 28-year-old Rachel Marie Moore, also known as Yona Marie, has been singing and writing almost all her life. She was born and raised in Maryland and parts of Washington DC. Rachel started out singing with her family often at church and in performing arts grade schools. In 2010, Rachel gained some mainstream popularity by releasing 'The Luv Exposure' featuring artists, producers, and singers from around the country (and beyond) that united to make great music. The lead single was featured on a Majormix release which included Chris Brown, Ace Hood and Tyga. In the summer of 2013, she released a track called "High" that went viral in the independent music world, garnering over 100,000 listeners and 20,000 downloads. The 90s-styled instrumental is credited to the late J Dilla. Rachel graduated in 2012 from Jacksonville University with a degree in Music Business. She currently spends her time engulfed in creating and marketing new music.