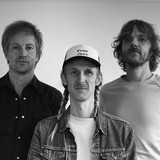 Bigbang is a chart-topping Norwegian pop/rock band that made its album debut in 1995, broke through to mainstream success in 2000 with the Top Five hit single "Girl from Oslo," and remained steadily popular in the years that followed. Formed in 1992 by Øystein Greni (vocals, guitar), Erik Tresselt (bass), and Christer Engen (drums), the band underwent numerous lineup changes over the years. Amid the changes, Bigbang remained a trio led by Greni, the band's songwriter, with Olaf Olsen (drums) and Nikolai Haengsle Eilertsen (bass, keyboards) lending their support for many years. Bigbang made their album debut in 1995 with Waxed. Little success came of the album, however, and several years passed before the follow-up effort Electric Psalmbook (1999) was released on Warner Music. Bigbang broke through to mainstream success in 2000 with the Top Five hit single "Girl from Oslo," whose popularity helped drive the accompanying full-length effort, Clouds Rolling By (2000), all the way to number two on the Norwegian albums chart. The EP-only singles "New Glow" and "Smiling For" were also popular, reaching numbers 12 and seven respectively on the singles chart. The follow-up album, Frontside Rock 'n' Roll (2002), was likewise successful, reaching the Top Five, while the live album Radio Radio TV Sleep (2003) was the band's first chart-topping release. Subsequent albums Poetic Terrorism (2005) and Too Much Yang (2007) were also chart-toppers, including the hit singles "Not a Rolling Stone" and "I Don't Wanna." All of this success culminated in a couple best-of compilations, Something Special: The Best of Bigbang (2007) and From Acid to Zen (2008), the latter intended for the American marketplace to capitalize on the band's recent move to Los Angeles. Working at L.A.'s Sound City Studios with co-producer Greg Richling (the Wallflowers) Bigbang recorded Edendale, their second American effort and seventh overall. Released in Norway in 2009 (followed by a 2010 U.S. release), it became their third consecutive number one and yielded the hit single "Swedish Television." Over the next few years Bigbang remained in Los Angeles, recording albums like 2011's Epic Scrap Metal and 2013's The Oslo Bowl, both of which failed to make inroads on the American charts but were massive successes in Norway, continuing their number one streak. In 2017, Greni, who remained the only consistent member of the band, made his solo debut with the Pop Noir LP. ~ Jason Birchmeier, Rovi