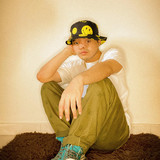 A 23-year old Kajang boy with big dreams, Airliftz’s star burns as bright as his spirit. Instantly recognizable by his unconventional appearance – Airliftz was born with a nose missing its cartilage – Airliftz’s artistry has only continued to grow and evolve as the emerging R&B and hip-hop star expands his musical horizons. With a natural affinity for songwriting, Airliftz injects every single one of the tracks he writes (or is featured on) with a feel and energy that is unmistakably him – keeping him a notch above the rest. Handpicked by Old Head Jin after a buzz-worthy open mic performance at a Raising The Bar event in Kuala Lumpur, Airliftz has since grown and flourished into one of the most promising prospects of Malaysia’s music scene. Equal parts rapper and singer, Airliftz has graduated from a “bedroom musician” (first finding an audience and outlet in social platforms such as YouTube and SoundCloud) to a full-on artist. With a fanbase that spans the entirety of Southeast Asia, Japan, Australia, USA, and United Kingdom, Airliftz’s voice is being heard from all over the world. Adamant about staying true to himself, Airliftz keeps both his feet steadily planted on the ground and his eyes on the prize; relentlessly moving forward in pursuit of his dreams.