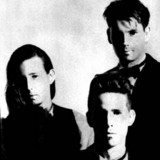 Samedi was a swedish synthpop band from Bollnäs in the mid/late 80s in the wake of the success of british synthpop and into an awakening swedish synth scene. They sprung up long before other swedish bands with that special swedish synth pop sound like Elegant Machinery and Mobile Homes. Samedis sound is inspired by a broad range of early 80s British electronic acts, like Depeche Mode, OMD, the Human League and Soft Cell. The band was made up by Mats Emmanuel Kjellberg (vocals), Per Norin (synthesizers, backing vocals) and Hans Kjellberg (synthesizer, backing vocals). Samedi has released three singles and the album Doubts & Beliefs on their own label Canned Music, they recorded in Forsa and Stockholm 1987-90.