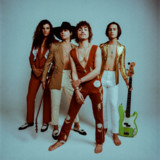 In three years, Greta Van Fleet went from touring the grimy rock bars of Detroit and Saginaw to headlining shows on five continents with audiences triple their hometown’s population. The band that once attracted crowds of teens to improvised forest concerts, have now sold over one million tickets worldwide. Stadiums in Italy are a far cry from a field strewn with pick-up trucks, framed by the canopy of tall coniferous trees, where they learned to love an audience. Colorado’s Red Rocks Amphitheater is a world away from the tiny Midwestern bars where they got their start (before they were even of legal drinking age). From Frankenmuth to a tour bus across America, then their first ever flight to Europe, their newest album The Battle at Garden’s Gate is a reflection of their journey into the present. Produced by Greg Kurstin and out now, The Battle at Garden’s Gate has an elegance unlike the band’s previous work. So many have been positioned as the future, we’ve forgotten how to recognize the real thing. Expectations may run high, but Greta Van Fleet is indifferent to opinion. The band doesn’t have to say a certain thing or act a certain way to convince anyone of their capacity. All they have to do is play.