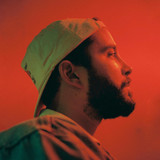 He began his journey as a drummer from Paris, France, playing in different bands and making audiences around the world marveling at his overwhelming presence and torrid playing. However, his fire on the toms could not compare to the one that later engulfed his house in Versailles. All was lost except a dysfunctional Roland MC-303 Groovebox that he found amidst the rubble. Could this be fate ? With this weapon of choice, he delved deeper into the world of electronic music. He meticulously studied every tone, tune, and technique of this vast genre; assimilated its elements; and began developing a voice all his own. He honed a style imbued with the sounds of '90s house, hip hop, and French Touch - all his earliest influences as an aspiring musician in the suburbs of Paris. His 1st EP "Golden Hours" (2017)

is inspired by a road trip through LA from sunset until morning’s first lights. It gets massive support from press such as DJ Mag, XLR8R, Kaltblut or Les Inrockuptibles.