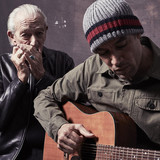 No Mercy In This Land is a blues record. Charlie Musselwhite and Ben Harper were introduced to one another by John Lee Hooker. The legendary musician thought the two men should play together, so he brought them into the studio to record a song called simply Burnin' Hell. The two remained friends and their paths periodically crossed out there on the road. But it wasn’t until 2013 that the two met up in a studio to record what would be their Grammy-winning album Get Up!. And as good as that record was, it was just the beginning. They both agree that their friendship deepened in the many months of touring that followed. And it’s that bond, that closeness, that makes this new record something special. No Mercy In This Land is a record made by two musicians who have lived. You can hear it in Ben’s singing, which moves from a soulful croon to a cathartic yell. And Charlie’s playing, always a thing of wonder, is absolutely transcendent, his lines dart and weave around the rhythm section with periodic moments of absolute virtuosity. It is a record that exists on the edge, the songs venturing out on to an emotional precipice. You can hear it when they are rocking, and it’s on the ballads, which will break your heart into pieces.