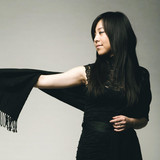 Haoyue officially began her musical career in 2012, when she graduated from Musicians Institute in Los Angeles. Working with musicians and producers from her school, she released her first EP "These Darling Wings" in 2014, and many singles in the Chinese region. In 2015, one of her Chinese singles was covered by one of the members of a well-known boy band in China called TF Boys, gaining popularity rapidly in the mandarin song market. While working on her artist projects, Haoyue has also been composing music for film/TV. Her music has been heard on numerous well-known productions including "The Mentalist", "Elementary", "VICE", the 2018 film "I Feel Pretty" and many others. Along with her collaborators, she was amongst the winners of the PMA Mark Awards in 2019.